I produce a number of sweet treats.  My maple syrup is bottled in a number of different sizes, including 250mL, 500mL, 1L, 1.89L.  The maple products I create from my maple syrup are maple butter, maple fudge, and a very decadent maple pie (think mapley butter tart).  Next year I will start harvesting honey from my bees.  I’ve been told to expect to get anywhere 50-100 lbs of surplus honey per hive.  Multiply that by 8 hives and I’m going to be swimming in it.  I think that’s when I’ll hang out my shingle and start selling honey and honey-based products.  Until then I’ll experiment with different recipes to find the best flavour, and try my hand at making lotions, beeswax lip balms and candles, etc.

Well true to my word I have been testing out maple recipes.  My oh my I have found some that are good … knock-your-socks-off good.  I am aiming for the perfect balance of sweetness.  So far I’ve found decadent recipes for maple cones, maple fudge, and just last night I made a dynamite recipe for maple pie – not too sweet, perfect consistency, lavish maple flavor.

I find it interesting to note that while bottling, taste-testing each batch (for quality assurance purposes of course) revealed an array of flavor notes (purely sweet, strongly maple, lingering sweetness, etc.).  These flavor notes are strongest when the syrup is sampled on its own, or on an ice cream parfait.  If you’ve got an idea of a recipe for me to try, please leave me a comment :).

We bought a drill press at Ottawa Fastener and Supply Shop’s ‘April Tools Day’ event on Thursday.  The worker who helped us, Bruce, was a wealth of information on buying the right tool to meet our needs, assembly, use, limitations, and care of the piece.  He listened to our requirements, helped us decide on the right model, and even helped us save some money too.  My hat goes off to him for a job well done.

Yesterday, AJ, myself and my Dad convened in the garage to put it together.  It’s a mighty good thing that Bruce gave us such a good tutorial because the instructions that came in the box certainly left much to be desired.  Regardless, we got the thing together.  Ooohh it’s a beaut!  We’ll be able to use it for cleaning buckets, putting together bee-hives and so many other tasks.  Picture of drill press in all of it’s glory soon to follow. 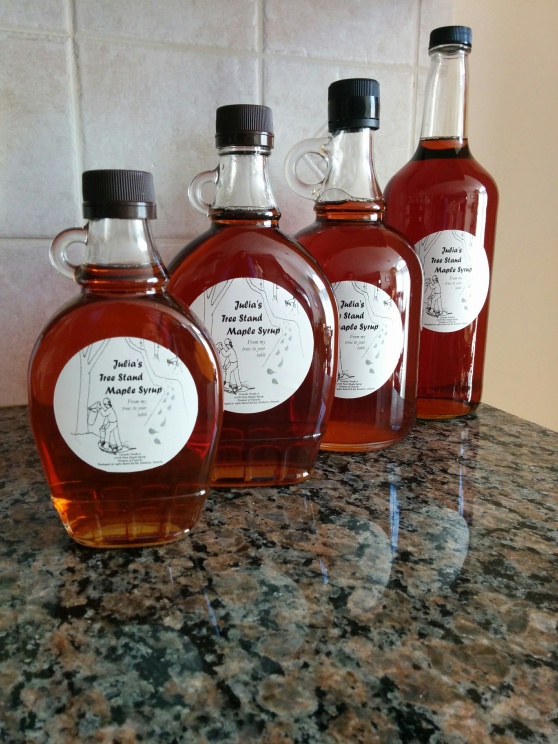 Mmmm MMMMM!   Our total yield for this year was 307 Litres!  Whew. thanks to everyone who helped out.

We are in the middle of our 3rd season now.  With a lull in the weather and pretty slippery conditions outside I thought I’d write a little update.

Slippery surfaces and below zero temperatures. 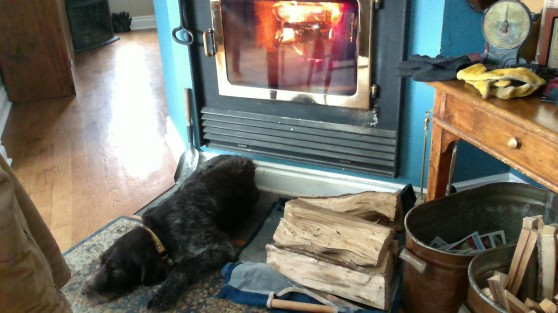 Our family dog Molson couldn’t get much closer to the fire if he tried.

A couple of weeks ago the forecast had me worried that it would be a very short season indeed, however such predictions have thankfully proven untrue.

I was given the great opportunity to feature my maple syrup at the Kinburn Easter Pancake Breakfast on March 19.  On top of that I held my own pancake breakfast for friends of mine on site.  What successes these events were!  In Kinburn I received compliments on the delicious flavor of the syrup and an appreciation in keeping with the traditional bucket collection of the practice.  Karen McCrimmon, our local MP stopped by as well, whom I had my picture taken with by a local reporter for the West Carleton Review.

We had a very good run of sap earlier in the week.  In fact, we hit capacity in terms of holding tank storage one day.  As a result, AJ and I had a full day of boiling.  Normally we start boiling in the late afternoon, after the temperature has warmed up for the sap to flow, and we’ve collected enough by the late afternoon to warrant it.  Not Wednesday though.  Wednesday we started boiling early in the day, kept the roaring fire hot with dry wood and managed to boil off over 500L of sap in our continuous flow evaporator.  We drew off 3 times which, for those of you who are wondering is A LOT!  Since we wanted to process as much sap as possible before it froze in the holding tank the next day, we set the drawn off syrup aside to be finished the next day and kept stoking the fire.  The syrup that we drew off was practically done, very little need for time in the finishing unit.  That batch was 27.5L; the clarity of that batch, and all the batches so far is excellent too.  I’ll update more later.  Right now it’s time to get back to work. 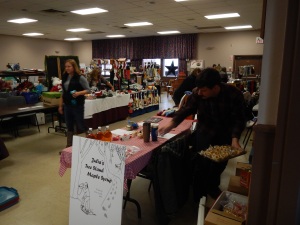 Here we are getting unpacked for selling maple syrup and maple products at the Kinburn Christmas Craft sale.

This past weekend marked my second market experience, this one where I grew up in Kinburn, Ontario. And what a fun experience it was, and successful too!  I sold maple syrup and other value-added products like maple fudge, maple butter and maple cones.  Held in the Kinburn Community Center the craft sale brought back memories of my childhood and my Dad teaching me how to make maple syrup, going on school field trips to sugar bushes, and joining a maple syrup 4h group and much more.  And the Kinburn Community Center holds some special memories for me too: I can remember going to family dances as a child in the very room I sold maple syrup in, taking tai kwon do classes, and so much more.  And I reconnected with a number of people I had not seen in years!  I felt like I was at the right place at the right time this weekend.  Thank-you to the organizers for ‘fitting me in’!

I’ve been getting all of my ducks in a row these past few weeks.  Since we tapped the trees 2 weeks ago, I have been stacking wood, cleaning tools, organizing equipment…and waiting for the sap to flow.  And waiting some more.  Since that week of sunny days with above average highs, the temperatures have dropped again (and I dare say plummeted last night to -15° Celsius with a wind-chill of -25°Celcius). Needless to say I’m antsy; I want to have a boiling day!  I’ve been keeping myself occupied by  double-checking that all of our equipment is in order, and doing beekeeping research (a story for another day).  In particular we’ve been fine-tuning our sap-transportation process.  Since the RTV has mini-caterpillar tracks on it meant for getting around in the bush now, it’s inefficient to be driving it back and forth to the house to empty the 50 gallon collecting tank out.  I purchased a bigger tank (over twice the size at 125 gal) this winter that we will situate in the truck bed instead.  So we will be dumping the buckets into the RTV tank, pumping sap from the RTV tank to the one in the truck, driving the truck to the sugar shack and then pumping the sap from the truck tank to the holding tank outside the sugar shack.    We mulled over the best way to do this given the equipment that we already own and settled on purchasing an additional pump to leave in the second collecting tank for the season.  Getting the proper sized fittings and tubing and quick connects has been a trial.  At Canadian Tire and then at Home Depot we went in search for the correctly sized brass fittings – no dice.  They had male 1/2 inch converter for garden hose, and a female 3/4 inch for vinyl tubing.  Plastic and pvc but not brass.  I reined in my compulsion to pull my hair out in frustration.  The only purchase that resulted from that excursion was garden seeds for pretty flowers.  We finally accepted that the most reasonable and economical solution is to duplicate the system that we already have instead of buying additional converters to fit the extra tube that we have lying around.  Meaning, we simply need to buy more tubing with the right inner diameter.  Big sigh.

Wistful thoughts of mine include hanging my shingle beside this door and selling maple syrup straight from the sugar shack.

With my second maple syrup season approaching quickly, thoughts of the sugar bush have been consuming my mind: sustainable woodlot practices, food preparation, equipment preparation…  The list goes on.  I’ve been tinkering with the idea of selling some of my maple syrup.  In designing the sugar shack we included a set of Dutch doors on one side of the entry way.  For me these doors bring to mind visions of old bakeries and other food producing kitchens where consumers could approach a kitchen and purchase food within minutes of it coming out of the oven.  I value the notion of goods going straight from producer to consumer.   Now, our operation is too remote (and muddy) to expect people to come knocking on our door looking for syrup, beyond a couple sales to friends at a pancake breakfast I plan on hosting but it’s still fun to include the Dutch doors design element into our sugar shack.  Since we are located close to Carp, selling at the Carp Farmer’s Market is the next best thing to selling straight from the sugar shack.

Here is my label design in all of it’s glory.

For fun I designed a logo to put on my bottles.  The design is a simple drawing; pencil, very flat style.  Basic yet distinct.  I chose these elements to convey the traditional, back to basics nature of our methods; and the unique flavors of pure maple syrup.  (What’s more is unlike some commercial brands my syrup is made from 100% maple syrup and doesn’t contain a plethora of ingredients that you can’t pronounce!)  Since I’ve got the design figured out, my next step is to find some label paper that I can print on and set up a printer template.  I’m thinking that I want an arched top, however that may cut off a lot of my drawing.  Maybe I should add some more tree limbs to the top….  Back to the drawing board!!

AJ wasn’t keen on being recruited to make maple butter even before his arms hurt!

Winter 2015 has seen some pretty extreme weather. -40 with the wind-chill? I’ll stay inside thank you very much. I heard on the radio that this winter has seen the coldest temperatures in 114 years.  We went for a walk in the sugar bush yesterday and found that a new path branching off from the main road had been roughed out with the RTV by my Dad. We walked it while I excitedly counted maple trees. “1 tap in that tree, 2 taps in that tree….” I thought to myself as we slogged through the snow. My rough estimate is we will get 15-20 more taps from the trees down that path. Us being as horribly unoriginal as we are, none of these paths have names. We’ve come up with ‘the treeline’ to refer to the path along, you guessed it, the treeline. Or the main road we’ve called ‘the main road’. I want to name this road something more exciting than “new path”. Maybe the rabbit path… We’ll see. More on that later.