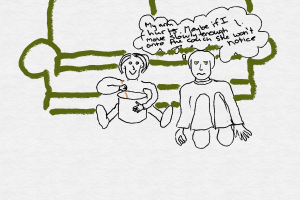 AJ wasn’t keen on being recruited to make maple butter even before his arms hurt!